Did you say PEARLS !

When the first women arrive in New Netherland in 1624, they brought quality textiles and other goods with them, but pearls don't seem to one of them. I know, I know... they had other things on their mind. However, within two decades pearls were showing up in early documents and never stop arriving.

Pearls do not appear in inventories, but there is a likely reason for this, as they are the perfect gift for mothers to bestow on daughters when they marry. Marriage gifts were an easy way around coverture laws and any estate taxes. (We'll get into this more later.) The first sign of pearls occurs in 1644, "Laurens Cornelissen persists in his statement that he received a box of pearls from the honorable director, but can not prove the same here,... in case of refusal, he shall be banished from this country until he prove at Amsterdam that he brought over pearls for the honorable director." In 1648, power of attorney and a purchase order was made by Frederick Lubbersen and given to Claes Jansen for pick up in Amsterdam which included two pearls for 20 florin (20 guilders).

Another 1648 account that mentioned pearls is as follows,
"Hendrick van Dyck, fiscal, ex officio plaintiff against the crew of the yacht De Cat, for the recovery of some pieces of eight and a few pearls which they secured in capturing the bark Nostra Senora Bosarlo and divided among themselves. The fiscal, instituting his action in writing, demands restitution of the aforesaid pieces of eight and pearls, maintaining that they are not plunder."- Link to New Netherland Institute

However, it was the next decade that a wave of pearls arrived in the colony. Large merchants and smaller "Pearl Peddlers" (as the Curacao record keeper called them) were looking for ready markets. An account left by Mr. Josua and Mordakay En' riques in January of 1656 which includes "100 pairs of pearl earrings", and "17 Bundles of pearls from "Venesia" of 10 strands each bundle" being stored in Curacao. We don't know where all the pearls ended up, but we know some made it to New Netherland.

The first shipment is loaded and sent in 1656 and a second in 1659 with a total of "7 pairs of Venetian pendants" and "28 bunches of Venetian pearls [ 10 strands each bunch ]". Captain Beaulieu leaves Curacao in the Caribbean and sails to New Netherland with a stop off in Virginia on the way. Unfortunately, we don't know how many of the bunches of pearls were sold in Virginia prior to arriving in New Netherland, but it is likely that all the pairs of pendents made it to the colony - as Venetian pendants require pierced ears. In addition to the pearl pendents, we have to remember that after the English seize control of Manhattan and Beverwijk (Albany) in 1664, trade went underground. The ships were suppose to leave Europe and head north to England to pay taxes before going to New York; they sometimes instead went south, sailed across the Atlantic to Curacao or other Dutch or French Islands. Then they sailed back north along the American coats. Plus, there was the trade coming down from French Canada into northern New York area around Albany.


Invoice January 1656 left by Mordakay En' riques
100 pairs of pearl earrings,
17 Bundles of pearls from Venesia of 10 strands each bundle


The below is a cropping of the original document which is found on the "New Netherland Institutes" website. Please check out their site it is a wealth of early 17th Century information including info from archeological digs. I am very grateful for the work and cost it took to bring these documents for FREE to the public ! New Netherland Institute Website link Between January and May, eleven more bunches of pearls are added onto the Captain's account than were in the Mordakay En' riques invoice. So, we can see that the Captain - who is referred to as a "Pearl Peddler" - had more than one source of pearl suppliers


Are you thinking what I am thinking? With this volume of pearls coming into the colony a fair number of women had the opportunity to purchase them with beaver pelts, sea-wan or other goods, as cash was not necessary.

Assuming the "pearl peddler" restricted purchase to one strand of pearls per customer, what percentage of the population may of purchased a strand? Notes: Total population of New Netherland was between 2,000 to 3,000 or about 1,000 to 1,750 females of various ages in 1655.

While pearls were the ornament (and investment) for both middle and merchant class, red corral and other semi-precious gems were the go to necklace for the working and also middle class. But in New Netherland and later New York, pearls could be purchased with more than just cash, as beavers, sea-wan and other goods could also purchase pearls. However, it is actually rather difficult to find women wearing their ear pendents and pearl necklaces in non-portrait depictions. While at home or at market most paintings show a woman with a scarf and ears covered.

Though...It seems that if you believe your man is about to announce his love... you are suppose to throw on a string a pearls, pull out something to read and ignore him. Below Painting, Cropping of "Man announcing is love." 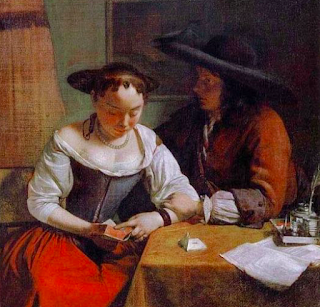 Of course pearls are for weddings, here the woman sits looking at the new couple entering the tavern. You can see her pearl drop earrings on the woman nursing a baby. Cropping of a painting by the artist Jean Steen (1626 1679) "La fiancée trust , Vienne. Kunsthistorisches Museum Jan Steen. 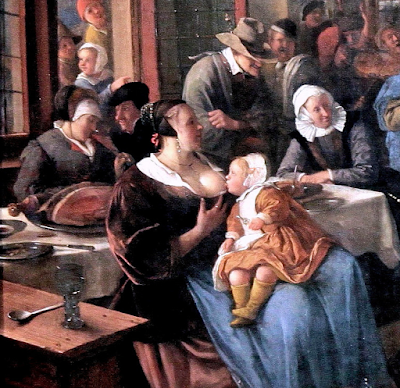 Or if you need to write a letter, first throw on a pair of pearl pendents and brooch, then get to work. Cropping of Vermeer's, Woman writing a letter. 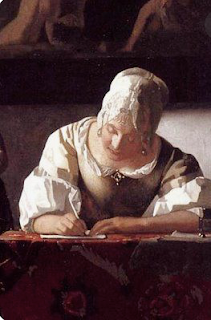 One last item found in primary sources are the correspondences to Anna Van Rensselaer, from family back in Holland. A number of items had been sent over by various family members with the intention of having Van Rensselaer "trade" them for beaver or merchandise that then could be sent back to Holland. One of the items to arrive between 1651 and 1656 were "crescents with pearls" from sister-in-law Hillegonda. We don't know how many were sent, but the phrase is plural. The crescents with pearls were having a difficult time being sold near Beverwijk (Albany and Hudson Valley region of NY) due to their high cost, and due to the drop in value of beavers in Holland. Later, a letter explains that the merchandise would be sold at a discount in order to move the goods. According to notes by the translator about the correspondences, on the same page, it is thought that these "halve mane met parle" are part of a headdress common or related to ones in Friesland. Whether these "half moons with pearls" were headdress pendents or another type of pendants is unknown, but they did exist.