From early in the 17th century, Europeans began adopting and appropriating indigenous clothing in the middle colonies. There is also evidence of indigenous clothing in New England, Delaware, and elsewhere. One of the most common items of the 17th century are indigenous bags, that are large enough to hold a number of strung trade beads called "sea-wan". (Some people use "wampum" but New York inventories use "sea-wan", "trade beads" or "Indian beads".) Coats, shoes, trade beads, and other items are also found for adult and children in both probate and shop inventories. During the second half of the century indigenous leggings become widely popular. There are possibly a few reasons for this including; protection while walking through brush or working but also for warmth. While it is difficult to determine whether certain garments were adopted or appropriated, we can look at where they are found in primary sources. There is a rather large number of indigenous clothing in inventories, too many for one post, here we will explore primary sources for the 133 pairs of leggings found in probate and store inventories due to their high frequency in the 17th Century.

"They [the "Wilde"] make their stockings and shoes of deer skins or elk's hide, and some have shoes made of corn-husks, of which they also make sacks." - Narratives of New Netherland

Leggings came in a variety of colors and designs before and after Europeans arrived. The earliest depictions of indigenous persons tend to be people from warmer climates and without leggings. However, later depictions of Northern Indigenous persons shows them with and without leggings. The Narratives of New Netherland was a 17th century publication written by Adrian van der Donk who's occupation stationed him in the Hudson and Mohawk region, so it may be used as a primary source guide. Prior to European settlement, leggings were made of durable leathers and this continued in the 17th century. As of now, further research is needed to determine when fabric leggings were developed. By the 18th century indigenous artist and clothing makers adopted or appropriated the use of woven fabrics into their work. Leggings tended to come in two primary heights/lengths; one that just came to the knee being gartered at the knee and ankle, and the second is shaped more like chaps and having a strap at the side that ties to a waist belt. Both appear in imagery of Native Americans in the northeastern and middle colonials.

Below are chap style leggings in the mid-18th century: Karonghyontye (Captain David Hill) is a Mohawk from the region near Albany, NY and who is pictured in the rear of painting. Colonial Guy Johnson who is in front was in charge of relations with the indigenous populations, National Gallery of Art, Link. Interestingly, the colonial in front is wearing leggings over his breeches but also moccasins. Yet, Karonghyontye is wearing the leggings on bare legs, but has healed European-British shoes on. This style of legging had a side-strap that tied to a belt at the waist. Karonghyontye's leggings also have a red vertical stripe on the exterior of the garment. The leggings worn by Colonial Johnson are likely made of fabric rather than leather. 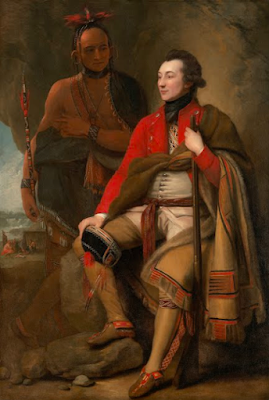 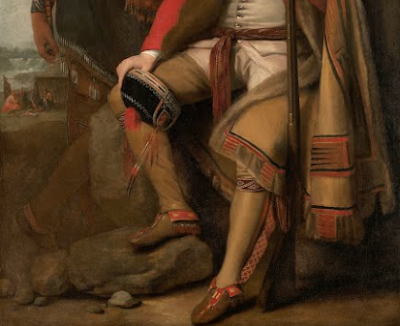 A number of the persons that immigrate to New Netherland and later New York are from regions in Europe that have a history of wearing lower and upper stockings, or layering breeches over long hose without a foot. Women too in some regions also wore petticoats over long hose without a foot. It is possible that the adoption of indigenous leggings by the European population was made easier due to the predisposition to similar garments. Below is an inventory from Albany where many mohawk people lived. It is possible that they came in the chap style as shown in the painting above, but the style is not noted in the inventories. Note the 32 pairs of red indigenous stockings. These may of been dyed leather or imported fabric. Also, "stockings" is historically correct, even though there was not a foot in them. But today we call them leggings.

Also, the Dutch use two terms for Native people one is "barbaar" or barbarian the other is "wilde". In court and other primary sources such as in inventories we tend to see "wilde", which literally means "wild, natural" in 17th century Dutch. The Dutch also use the term "babaar", but as in the 1640s Governor Kieft's writings suggest it is not the most common term and used most often when angry or scared. We don't really have a dirrect translation for wilde other than maybe "nature's people" or "natural people" and it doesn't translate to "Indian" in the same sense. For reenactors, this terminology should be use respective of the region. Because as is evident in the 1693 inventory below, the term "wilde" is still being used in Albany 20 years after English sovereignty was granted in 1674. Whereas, "Indian" or "Savage" is used in NYC and Long Island during English sovereignty.


In 1693, the following items were for sale in a Lysbett van Eps's store in Albany, New York taken during the English era; 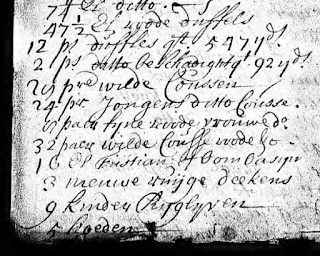 The 85 (possibly 94) pairs of indigenous leggings in van Eps's inventory taken in Albany, NY are likely made by the indigenous women and traded for other goods in van Eps's shop. Early court records show Indigenous people purchasing "cakes" (cookies?) with van Eps present and other goods. Albany had four indigenous villages or "castles" close by. With healthy trade moving back and forth between New York and Canada. The European settlers had a strong relationship with the local Mohawk population despite many of the Europeans often feeling unsure on how to "read" their relationship; the Mohawks came to their rescue and they vis versa in the 1690s when Canada invaded New York.

In 1675, and 1697 two different small merchants in New York City had "three pr. of Indian trading stockings at 00:06:00" and "30 pair Indians "Stockins” 03:00:00, 5 pair “wirsted” “Stockins” 01:05:00" respectively for sale in their shops. A shop out in Flushing Long Island in a 1680 inventory shows the couple had "fourteen “paire” of Indian Stockings" for sale in their shop, and then in with the tools another “one 'paire' of Indian Stock & 'breeches'". This last listing also mentions in the inventory, an "Indian “Mann” by name Phillip". We get a glimpse at how these stockings were being used, as the 1680 inventory states that 14 pairs were for sale in the shop, whereas, one lone pair were with tools. Many of the 1680 inventory's indigenous items were possibly made by Mr. Philip, who was a person of Indigenous heritage.

Below is an example of leggings that were tied with a garter at the knee rather than a strap from the legging to a belt. Link. 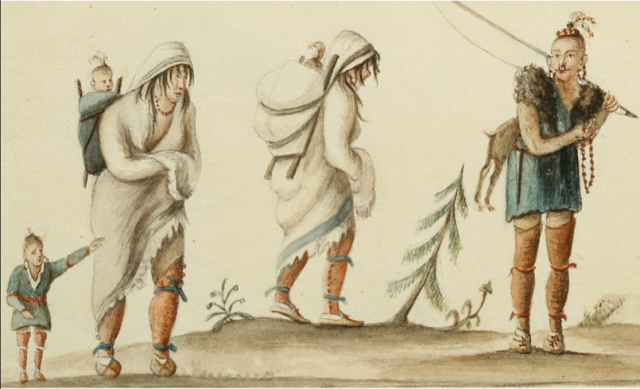 Here are extent 18th century gartered at the knee leggings from the St. Lawrence area which are made of leather. And check out the amazing blog who posted about these and other authentic art made by people of indigenous heritage, Historic Iroquois and Wabanaki Beadwork, Beautiful ! 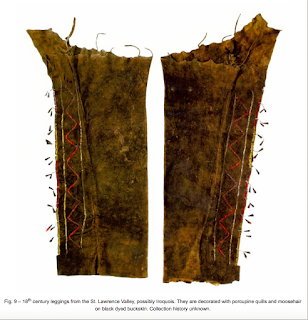 Additionally, many teenagers in New York entered apprenticeships at about 12-16 years old. This may be why there are a number of youth stockings as it would protect their lower legs while learning carpentry and other trades. Had the 1693 Albany leggings for young persons been for small children it would of read for babies or "kinder" children rather than youths.


Example of Ottawa persons from just the other side of the boarder in Canada, Link. 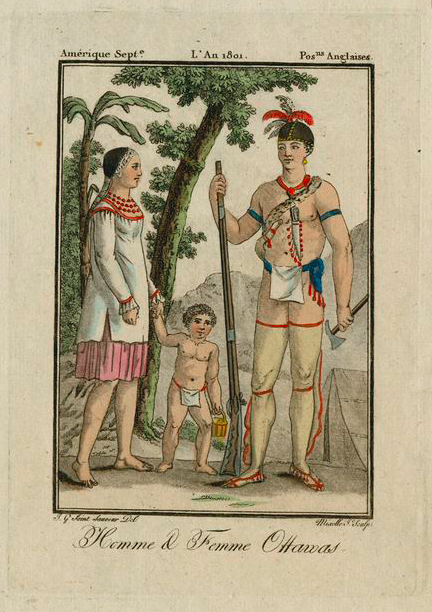