We slept here in this house, and ate large quantities of pumpkin, beans, and venison so that we suffered of no hunger here but fared as well as it is possible in their country. I hope that everything shall succeed.


This is a repost from last year for the other half of the viewer that did not get to read it.

For Thanksgiving I am sharing excerpts from a 1634 account of an early trader's travel to various Mohawk castles. Castles are walled fort villages made by Indigenous people. The homes within the walled fort can be 80 to 100 steps long and 1 to 2 stories tall; with a barrier wall made from tree trunks that were sunk into the ground like a fence... a very thick and tall fence. If you look at the rectangular wall below in the image you'll see bump outs along the sides, which are similar to the bump outs on European made fort walls. They are there so a person from the village can look down from the top of the wall and can easily see the base of the wall; which without the bump out would be a blind spot for attackers to conceal themselves. These are very clever modes of defense. When the traders arrived at a castle they were often welcomed into the Mohawk's homes and fed. Foods included corn, but also beans, squash, venison and turkey. Many varieties of beans and squashes bought in modern grocery stores and served for diner today were originally developed by the Indigenous people of America.

Image below from the 1662 map of New Netherland. 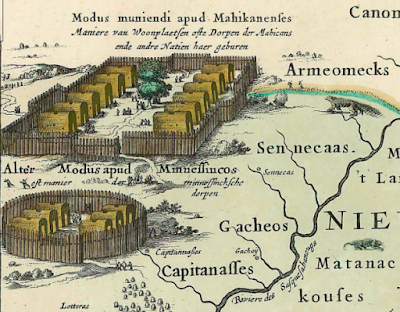 12th of December, “After we had traveled an hour, we came to the tributary that flows into our river [Hudson] and past the Marquise’s villages [near Cities of Schenectady and Scotia]. Here there was heavy ice flow… After crossing over, we went another one and half miles and came to a hunter’s cabin. We entered and ate some venison there. We then continued our journey. After we had gone another half mile, we saw some people coming towards us. then they saw us, they ran away. Throwing down their bags and packs, they ran into a marsh and hid behind a thicket so that we were unable to see them. We looked at their goods and packs, taking a small loaf of bread baked with beans. [modern Iroquois corn bread is made with cooked beans.] We at it up and continued…by estimated,…eleven miles. ”

12th of December, We came to the first castle called ONEKAHONCKA, which stood on a high hill. There were only 36 houses, row on row in a manner of streets, so that we easily pass through… Some are 100, 90, or 80 steps long; 22 or 23 feet high. There were also some interior doors made of split planks furnished with iron hinges. In some houses we also saw ironwork: iron chains, bolts, harrow teeth, iron hoops, spiked,…Most of the people were out hunting for bear and deer. These houses were full of grain that they call ONESTI and we corn. inded, some held 300 or 400 skipples [2/3 of a bushel]. They make boats and barrels of tree-bark and sew with it. We ate here many baked and boiled pumpkins which they called ANONSIRA. Non of the chiefs was at home, except for the most principal one called ADRIOCHTEN, who was lying one quarter mile from the fort in a small cabin because many Indians here in the castle had died of smallpox. I invited him to come visit with me, which he did. He came and bid me welcome, and said that he wanted us to come with him very much. We would have gone but we were called by another chief when we were already on the path, and turned back towards the castle. He had a large fire started at once, and a fat haunch of venison cooked, from which we ate; he also gave us two bear-skins to sleep on, and presented me with beaver pelts…. We slept here in this house, and ate large quantities of pumpkin, beans, and venison so that we suffered of no hunger here but fared as well as it is possible in their country. I hope that everything shall succeed.

14th of December,  Jeronimus wrote a letter to the commissary, Marten Gerritsen, asking for paper, salt, and ATSOCHWAT [ tobacco ]. We went out with the chief to see if we could shoot some turkeys, but got none. However, in the evening I bought a very fat turkey for 2 hands of “sea-wan” [trade beans], which the chief cooked for us; and the grease that cooked from it he put in our beans and corn…Two Wilde left from here for Fort Orange with skins.

16th of December, In the afternoon a good hunter named SICKARIS came here who wanted us to go with him very much and carry our goods to his castle [ the second castle ] . He offered to let us sleep in his house and stay there as long as we pleased. Because he offered us so much, I presented him with a knife and two awls [ small pointed tool for piercing holes, used in leather or wood working]; and to the chief in whose home we had stayed [ in the fist castle ] I presented a knife and a scissors.

16th of December, After we had gone one half mile over the ice we saw a village with only six houses. It was called CANOWARODE, but we did not enter…after we gone another half mile we passed a village with twelve houses called SCHATSYEROSY…a mile or mile and a half great past great tracts of flatland, we entered a castle…called CANAGERE… on a hill without palisade or any defense….

4th of January, castle called TENOTOGE. It had 55 houses, some 100 steps in size and other more or less as large. The waterway that was mentioned earlier ran past here and took the course mostly north-west and south-east. There are more houses on the opposite bank of the waterway; however, we did not enter them because the were mostly full of grain. The houses in this castle are full of grain and beans. Here the Indians looked on in amazement; for most everyone was at home, and they crowded in on us so much that we could barely pass among them. After a long period, an Wilde came to us who took us to his house and we went in it. The castle was surrounded with three rows of palisades. [the village was surrounded by three walls each made of tree-trunk spikes forming a 9 foot tall wall]. However, now there were only 6 or 7 sections left, so thick was the wall that it was unbelievable that Wilde could do it. …. Today we feasted on two bears, and we received today one half skittle of beans and some dried strawberries. Also, we provided ourselves here with bread that we could take along on the journey. Some of it had nuts, chestnuts, dried blueberries and sunflower seeds baked in it.

5th of January, [next village] I bought four dried salmon and two pieces of bear’s meat that was nine inches thick; there was some here even thicker. Today we ate beans cooked with bear’s meat. Otherwise nothing occurred. Jan. 7th. We received a letter…our people were very troubled because we did not return, thinking we had been killed. We ate here fresh salmon that had been caught but two days ago.