The rucksack and knapsack are items that can easily be traced back to the 1530s and were used throughout the 1600s and 1700s. The rucksack is often seen on people when carried on their backs as a cross body bag. Wheres, knapsacks are smaller and carried slung over the shoulder or hanging from a stick vagabond style. The two bags form a set used by travelers; though sometimes I get the impression that they are one and the same.

Below: Cropping of a traveler visiting a "The Doctor's surgery", Attributed to Michiel van Musscher (Rotterdam 1645-1705 Amsterdam)

For reenactors this is a very practical and useful item, which can be worn by men, women and children. It also allows you to keep your arms free during events, while keeping anything you deme too valuable to leave behind in a tent with you at all times but on your back. Below are references to the rucksack. I don't have a knapsack in the inventories from the 1640s-1790s.


Thanks to Mr. Oovenmeester Richard, a 17th Century reenactor, who found the first photo of a rucksack for me; it also lead me to find a few others. The black bag below is an extant from the 17th Century and is located at the Geheugenvan Nederland Museum Link. And another photo Here and Here ... and one more Here.

FYI, if you type in "draagzak" or "voorraadzak" you get the photos linked above and baby carriers.

After seeing a number of these rucksacks in paintings and images I got it in my head that this would be a handy bag to take with me to the park, when visiting historic sites, and simply to enjoy a connection with the people who made the journey across the Atlantic. I managed to find a modern maker of these bags and thought I would share. I don't get a referral fee, instead my goal is to supply my readers with links to well made items produced by small shops just like they would have 300 years ago.

Check out Chris Thomas's 17th Century linen canvas and (pictured below) a golden goatskin rucksack which are "made to order" items, you get to pick what your rucksack is made of. Chris can be contacted through email: christophus@aol.com or through Facebook at Christophus Leatherwork & Trading. His Facebook page is a tour through time, with many images of items Chris is working on for special orders and even museums. 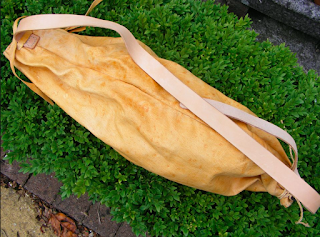 Any reenactor or historic site whether in England, Europe or America knows that primary sources count when picking out what to use or display. Here are documents that mention these items from 1755 back to 1530 and give clues on how they are used.


1755 - "...the knight and squire therefore, dismounting, and leaving the ass and Rozinante at pleasure to regale themselves with the rich pasture, emptied their knapsack, and without any ceremony, attacked the contents, which they ate together like good friends..." - The History and Adventures of the Renowned Don Quixote, Volume 1, 1755

1688 - "I heard Sir Thomas Fairfax relate of a Souldjer in Ireland, who having got his Passport to go for England, as he past through a Wood with his Knapsack upon his Back, being weary, he fate down under a Tree, where he open'd his Knapsack, and fell to some Victuals he had; ..." - Book: "Epistolæ Ho-Elianæ: Familiar Letters, Domestic and Forren. Divided Into Four Books, Partly Historical, Political, Philosophical, Upon Emergent Occasions", 1688

Translation:
1530 - "...God for a fool / useless pen arranges us / and not wust / what he should stifften us or as if he were a knapsack / lazy naughty true umbhertruge and unsanböte / ..." - "Vermanung zum Sacrament des leibs und bluts unsers Herrn" by Martin Luther 1530.


This last one, 1530, was a bit too hard for me to translate correctly. But we get the idea that everybody liked knapsacks and they had one particular purpose, to carry food. This is compared to a rucksack which was used for travel.