They didn't have them... 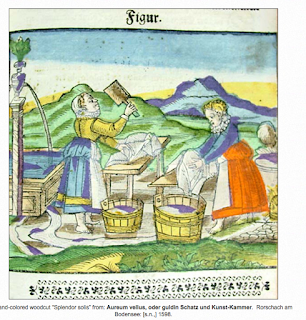 The people of New Netherland - from New Amstel, Delaware to Schenectady, NY - were probably some of the most well washed people in the colonial world. This is not surprising, as when people are lifted up to middle class status they tend to take on practices that are pleasurable and that differentiate. One item that seems to be on many people’s minds…is the laundry.

Who does the laundry is sometimes defined in contracts whether for orphans, independent contractors, or indentured servants. It is listed right next to shelter and the food.

“Indenture of Gillis Jansen as farm servant to Cornelis Claessen Swits, …for a term of 6 consecutive [years beginning] the tenth of October last past, to serve…to farming…he, Gillis Jansen, promising to serve…for which services he shall annually receive as wages the sum of eighty-three and one third Carollus guilders, amounting in six years to the sum of five hundred Carolus guilders, provided that the aforesaid Cornelis Claessen Swits promises to supply him, Gillis, during his bounded time with food, drink, washing and lodging, according to the usage and custom of farmers of this country.” Dec 1st, 1642

A contract does not usually stipulate how often or the time of year the laundry has to be done. However, the Gillis Jansens’s requires annual payments. It could be assumed that he would get is clothes washed at least once a year. But it also does not state how often Jansen’s drink and food rations should be administered. So, one cannot assume the washing was only once a year. However, Tonis Cray’s contract is for four week and has the washing being done once a week. What is more interesting is that a laborer - possibly carpenter - is demanding a certain standard of living that people in other parts of America are living significantly below.

It appears that the laundry was done even in winter. Two continental paintings by Hendrick Avercamp include people out on the ice doing laundry in the fridged waters. In one example, a woman in a working class jacket is kneeling on the ice, two hands are holding onto a red garment. The garment is directed through a circular whole in the ice into the lake. In another painting, a circular whole is to the left of the washer who has a laundry basket with “whites” in it. He too is in working class clothes and is standing, facing a clothes line. One red garment in rectangular shape is already thrown over the line to air dry, as he holds a second red garment half hung.

Who is doing the laundry is alluded to in the New Netherland papers. Avercamp’s Netherland paintings clearly show a woman and a man each doing small batches of laundry in the winter season, both linen and colored. Though, it appears that both men and women took on the job of larger scale laundry washing in New Netherland. The two examples, below show that the man, Roelantsen, may of done the laundry himself, though he could of easily of hired out the service. The other example is clear on who will be doing the laundry.

“Adam Roelantsen, plaintiff, vs. Gillis de Vooht, defendant, for laundry money. Plaintiff demands payment for washing defendant’s linen. Defendant says that he is not offering to pay less in payment for the washing, only that the year is not yet expired. Plaintiff is ordered to fulfill the term of the contract and then to demand payment.” 6th of Sept. 1640


“…to be his [ Claes Willemse van Coppernoll’s] foreman on the farm at Cattskill, and his [Jan Conell’s] wife to do such other services as may be needed there; and that for the sum of 42 good, merchantable beaver pelts, one half to be paid next winter in wheat, at market price, and the other half at the end of his term of service in beavers; his wife shall be furnished with soap to wash for herself and the others on the farm;…” 1678, June 18th - June 18th 1678

Jan Conell’s contract is most interesting, because it takes place in the Cattskills and demonstrates like the Gillis Jansen and Tonis Cray contracts that farmers, laborers, indentured servants and similar were regularly having at least their linens washed. This brings the standard of living up significantly compared to other American colonies.

How the Dutch came to be so clean possibly has as much to do with being in the right place and the right time as it does with being of the right income. The Dutch during the 17th century lifted over 60% of its population out of subsistance farming status to middle class. Even the Dutch milk maid saw an increase in status. Though, one of the lowest paid persons in the Netherlands and Flanders, the Dutch and Flemish paid their maids more than another nation. With Dutch, Flemish and their immigrant workers having higher incomes per job than their counterparts in other nations their consumption and quality of life excelled. They therefore were ready and able to adopt new habits and life styles that reflected their new found advantages.

Washing tubs are found in a number of inventories. Gysbert van Imbroch 1665 of Wildewijk (modern Kingston) has "two washtubs one large and one small".  Sigismundus Lucas,  1681 a "washing 'tubb'" and "one tub" more. Thomas Palmer 1681 of NYC also had three wash tubs.  The Widow Mary Masters 1702 of NYC had 3 wash tubs and a smoothing iron. Abraham Turk 1787 had "1 large wash tub, 2 small do." As you can see, three washing tubs seems to be a standard in New Netherlands and New York.

Smoothing irons and clothing brushes were rather common too.  Jan Reynersen 1665 at Fort Orange had "one smoothing iron". Imrboch 1665 who has three washing tubs also had a clothing press (a free standing piece of furniture and "one clothes brush".  Imbroch also had a mangle which was a long wooden paddle usually decorated and used for smoothing out bed sheets, plus a "clothing line". Sybrant van Schaick a brewer 1686 also had "1 cloth brush".  Van Macken 1664 had both a mangle and "stick pin" which may have been the paddle used for washing or some sort of "roller pin" co-located with the mangle.

Starch was also common, Gerrit Bril 1659 - in New Amsterdam headed back to New Amstel - had "a square box with starch and washing blue".  There are so many mentions of Starch and blue wash or blue starch it seems it was something accessible to most people.


Something interesting pops up in 1787 in an German inventory in Up-State NY, "1 board 00:00:04, 1 washing bench 00:00:02". the inventory is in German. Translation books have the washing bench as a horizontal plank or board that the washing tub is set on. This raises the tub to standing height. The board located with the plank is likely a washing board with a ribbed surface.

I hope this provided a quick gimps into who and how people got their washing done. Washing was not done daily or every other day like in modern times. A skim through 19th and 20th century history and washing into modern times finds that people on average wore their underclothes all week long as one corporation found out the hard way in the 1940s. Until the invention and mass acquisition of laundry machines laundry was done at most weekly and more likely the further you go back in time, monthly or less. In New Netherland due to there being a a local business and small home laundries operating, linen and likely stockings could be washed as often as weekly for even the labor class based on some of the contracts that have been preserved.