As I continue to read through old docs. I came upon more rapiers. They seem to be a staple throughout the 17th century.  "Van Twiller sailed from the island of Texel, on the ship 'Soutberg', shortly after July 27, 1632, and arrived at New Amsterdam in April of the following year... " Wouter van Twiller took with him, "a silver plated rapier with baldric and a hat with plumes for the 'schout' [Rutger Hendricks van Soest], and black hats with silver bands for the 'schepens' [Roelof Jansz van Masterland]".  - Minutes of the court of Rensselaerwyck 1648 - 1652 - See Dutch/Flemmish Rapier with silver mounts below. 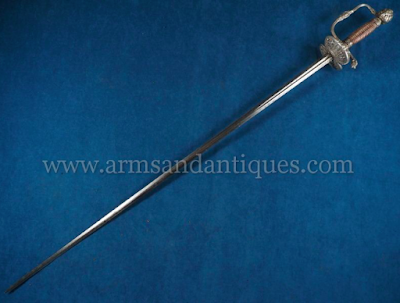 In the same book we see on March 22, 1652, when the commissioner came to Mr. Sander's house in order to bring his servant/slave into court. The servant/slave was accuse of slandering another person [probably a white person]. When Sanders ask the commissioner to come back the next day, he became angry threatening to haul the whole family into court and to shoot up their home. Sanders explained that the commissioner was not his master and in response, "Whereupon the commissary drew his rapier and threaten to run said Sander through, so that Sander in defending himself was stabbed." However, it appears Sanders survived the attack.

In the Fort Orange and Beverwyck Court Minutes for Feb 3rd, 1653 we find a duel ! Jacob Jansz Stoll while drunk but on duty with the Burgher guard stumbled into the guardhouse. Where Stoll then threaten "Jochem" Becker the baker and Corporal in the guard, "to fight against him [Becker] with his sword and threatened to cut and hack at him, the corporal, with the sword, holding it unsheathed in front of said corporal's nose and saying: 'I dare you to draw your colonel's rapier.'"

Stoll seems to of had problems with drinking and anger because on June 30th of 1654 he was brought into court for stabbing Dirrick Lammertsz. Darrick says to Stoll while shaking him by the sleeve but not sticking him that "he should keep his mouth shut, or he would sew it up with a waxed thread." Stoll said that Dirrick was a beggar, with Dirrick countering, "Go and get a sword or a rapier and strike, if you are an honest fellow!"

Another account in the court minutes from 1657  have Lambert van Valckenborch plaintiff against Hendrick Claessen and Gerrit Willemsen defendents. "Plaintiff complains that the defendants beat him and his wife in his own houses. The defendants deny it and claim that the plaintiff chased them with a naked rapier out of his house and pursued them to the center of the fort."

The likely reason for the considerable number of rapiers is simply because both the soldiers and citizens who served in the burgher guard carried swords and rapiers. This created a high demand, and why 30 of them would be used and rusted by 1648 when the blades were beyond battle use and past into trade with indigenous persons. There are two more accounts of people fighting with rapiers in Ulster County, another person speaks of the term "rapier of war", and another inventory has a sword and sheath.

However, it is the inventory of Mr. Marken in 1664 that is awesome. This is not the first time I have seen this item, there are about three that I have seen in total. But I am sure it is one reenactors would love  !