Rapiers, Pistols, and a Katana

The weapons in 17th century New Netherland and New York span a wide range of goods including rapiers, pistols and even a Japanese cutlas.

Rapiers in the 17th century were slender pointed swords with significant reach. The hilt had a shield for protecting the hand that was usually rather ornate. Two are given in the examples at the bottom of the page; the one listed in the 1643 inventory of Jonas Bronchas with silver mounts and the other is in the 1651 inventory of  Jan Jansen Damen and Brewer. The photos of swords in the Rijk Museum shows at Left a Rapier from 1590-1596 and right is a Degen from 1660.

Women usually had scissors, thimbles and bodkins. But sometimes, they had small knives or a pair of knives. Women of all classes whether working, middle or merchant wore knives during the first half of the 17th century. Images show women from the Netherlands to Wuttenburg and other Germanic regions wearing knives on their girdles. An oil painting of a woman from Wuttenburg hung at Fort Crailo in Albany NY shows a woman with a gold sheath and likely two knives... alternatively they could be a fork and knife. Her head cover is a fur hat that is commonly worn in the Wuttenburg and neighboring areas. She is also of the merchant class based on her clothing and gold chain; and dates to the 1630s because of the high-waist robe-gown she is wearing. While it would be great to know if this painting was brought over during the 17th century by one of the early German settlers in the region, it remains unknown.

The woman's knives are stored in a sheath that is hung on a chain, which is attached to a girdle. A set of knives in a sheath are seen on the left hand side of the image of an Old Peasant Couple Dancing linked below. Both the man and woman have knives tethered to their girdles. In the 1643 etching in this post you can see the knife in sheath hanging from the girdle of a woman from the Franco region of southern Germany. 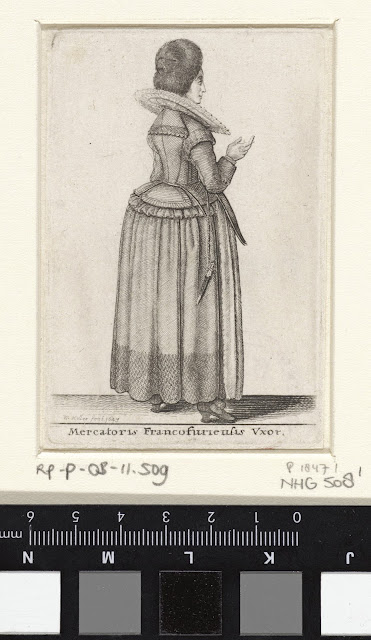 Alternatively, the Japanese cutlas was used only for fighting. A Japanese Cutlas is listed in a inventory from the New Netherland era, located in what would be modern Harlem. While Jonas Bronc Japanese Cutlas is the only Asian weapon found in inventories, is not the only product of Japanese origin. Other inventories have Japanese scales used for weighing groceries, and Japanese clothing are also found. So, its possible that other Japanese items are present but don't turn up in inventories. Below is a Dutch tile of a Japanese warrior and his sword made between 1635-1645. In 1641, the Shogun of Japan entered into an agreement to begin trade with the Netherlands. 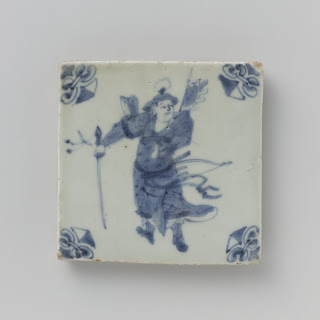 The inventory below of Ides Stoffelsen includes 4 pistols. While the pistols may of belonged to her previous husband, they probably provided a safeguard on her new farm in Pavonia, New Jersey which was then part of New Netherland. Below are a pair of Dutch Wheel lock pistols, in the Rijk Museum collection. 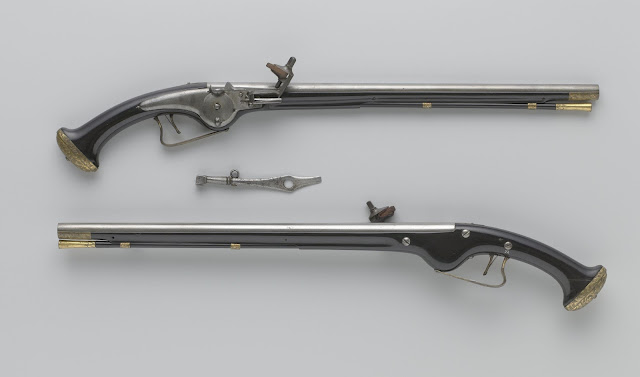 While many inventories do not list a full description of a particular item, we start to get a glimpse of how common it was to have a sword or pistol or multiples there of. I hope you enjoy the excerpts from some of the inventories in my database. The following items are goods found in inventories from the 1640s - 1702 in New Netherland and New York. Below a pair of wheel lock muskets-rifles were produced between 1650-1690. 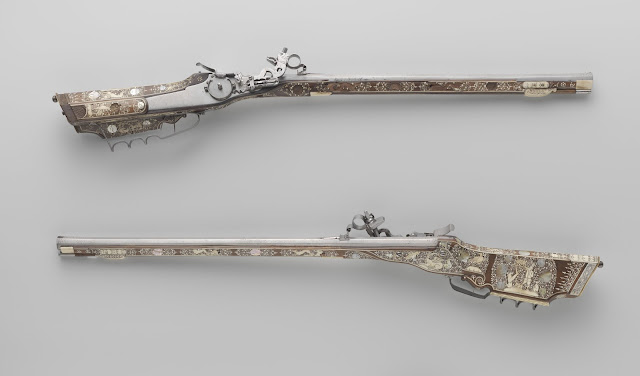