Woman's Knives in a Tube

To expand on "knives in a tube" for women we'll look at how they are included in wardrobes, worn and used. There are at least three and probably more types for the ladies than I have found so far, but this will provide a launching point to work from. Both of the below are found in inventories.The third, utility and fancy knives will be covered in another post.


From Museum Vieeshuis in Netherlands two knives in sheath dated to 1562 Link: 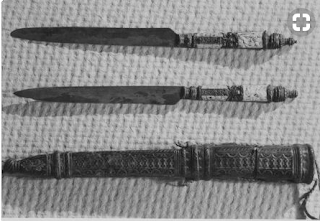 The 17th century was both an adventure and consolidation era for those on the European continent. The introduction of new goods were spreading from one nation to another. Many made it to America. Unfortunately, I don't have comparison info for England and New England, but of the 16 New England inventories I have from 1633 - 1675 I haven't found "women's knives"; though I suspect they existed or at least women adapted the use of them at some point. This said, one woman has a blunderblust ! I love this woman.

But I digress, the 17th century sees a massive leap forward and there is a reason why it is grouped with the Modern Era as apposed to the middle-ages. Nearing the end of the Italian renaissance, enough ideas and developments of economies had occur for Central and Northern Europe to increase international trade and exposure to other cultures. The Flemish and Netherlanders had developed strong textile industries during the middle-ages, along with the invention of new technologies including the windmill for industrial purposes (except for the 12th century one developed by the Italians for the fulling of woolens ), business models focused on warehousing huge quantities of goods, and the fluyte a ship that only needs the same number of men as a gallon but with a pot belly able to carried more than twice the cargo. These developments did something rather unique, the Dutch were able to buys goods in one nation and ship them for low costs to another, AND they paid their workers and laborers more than comparable workers in other nations. (More on incomes later.) This meant that the average working class person could afford meat once a week, and had access to goods from around the world.

1) What is called "ladies knives in a tube" or "woman's knives in a tube" is the movement from women in the middle ages from having a single small all-purpose knife, to knives for specific purposes. Its not that they didn't exist before, but that during the 17th Century laborers, peddlers and farmers were able to access goods that may of been either too expensive or just not available.


Below is a painting of a Fanconia-Wuttenberg woman (note the round fur hat), name unknown, about 1620s-1630, upper middle class, merchant or nobility. It is difficult to tell sometimes due to the similarity of clothing between the wealthy middle class and nobility. The painting is in the the Crailo Fort historical museum near Albany, NY. We don't know if the painting was brought over as a Victorian era souvenir, or with an early settler. While not clear in the photo, the tops of the utensils are very similar to the design posted at the bottom of this post. 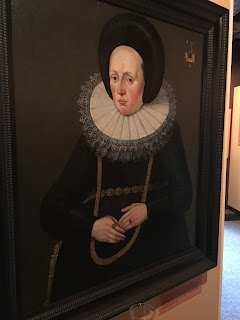 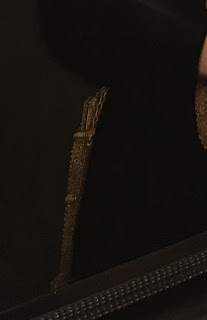 The Crailo museum also has an early fork and knife without a case on display. It was found during a dig on the site. The knife right below the Crailo knife, is a 1760 Dutch antique, Link.. Note the bird wing or feather shape of the blades. 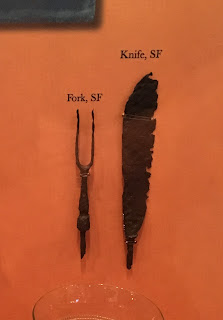 The ladies knives in a tube are worn by the women of the Netherlands, Flanders, Frankfurt the greater Franconia region, and Wittenberg which over laps with Franconia and in America. They are worn in other areas, but my data is specific the regions above.

The allegory by Adriaen Pietersz van de Venne (1589 – 12 November 1662) shows a poor couple. Though poor, she still has a sheath for cutlery. Many of de Venne's prints (post 1620s to his death) are made from works created by the Dutchman Jacob Cats. Adriaen Pieters van de Venne 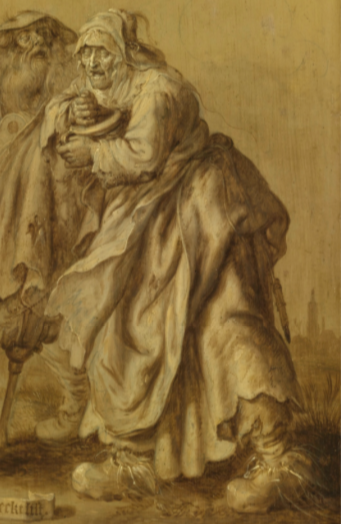 Here is a simple set in tube from the Netherlands from http://www.rondom1920.nl. The shape is a lot like the ones shown in the images of women with a long strap to a thin sheath. There are actually two tube attached together, with separate openings for each utensil. When the utensils are in the sheath or "Hoes", they protrude out the top, total length is 18cm. 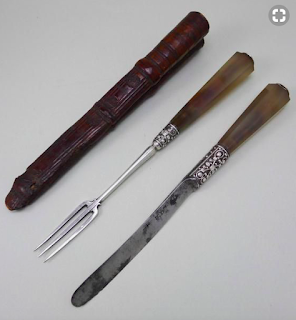 Another of de Venne paintings is an allegory of greed, but in stead of a wealthy merchant a  male and female peddlers are the focus. This is a cropping of the Art.net image. Link 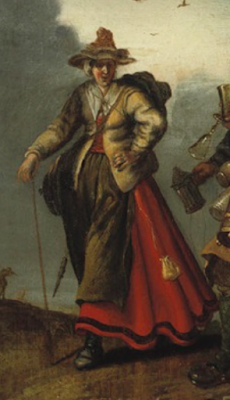 Pheasant Couple Dancing by van de Venne. Note that for peasant, working class and peddlers the sheath is hung rather low, with the top reaching the knee. Link 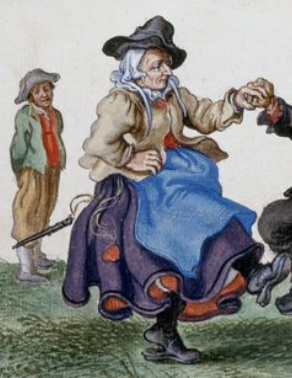 An one more of van de Venne's, woman with fish basket. The only thing about this image is her head dress is made of fur. It is in the Franconia-Wuttemberg style. She may be an immigrant and explains the look a young Dutchmen - not seen here - is giving her.

An older image about 1600. The woman is middle class and we can tell because she is wearing a Spanish ropa (robe) and "hyke" or long vail, a common outfit for married women of Flanders, the Netherland and German regions at this time. Link 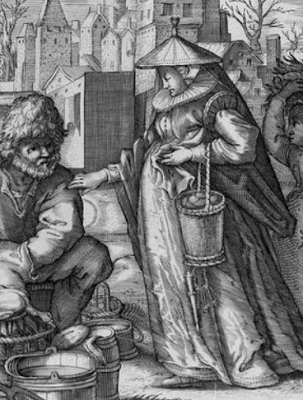 In the 1692 Deledique New York inventory we have "2 knives & 1 fork & pocket pistol". The below image of red cutlery is of a man's version but demonstrates just how fancy they can get. While referred to as a "hunting kit", it was not a carving set as they are too small and lack a blade sharpener. The back of the case has owners initials and the date of 1667. 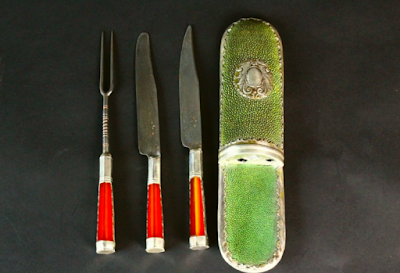 2) One of the many items that originated in Italy, later turning up in the Netherlands and brought to America was the fork. This transition from two knives to a fork and knife reflects the adoption of new eating habits. You need a reason to adopt forks. For the Italians it was due to a specific pasta (a general term) called "spaghetti". In American English we tend to use "spaghetti" naively to mean all pasta, when it is specifically only a medium thickness very long noodle that are difficult to eat.  For the Dutch is was not pasta, or meat, as stabbing it with a knife worked perfectly fine... it was due to the Dutch introducing a new food. A "lettuce salad" with "salad oil" dressing. No joke. Those modern day ladies who lunch in Manhattan have been doing it for almost 400 years (They arrived in 1624). Below the 5 cases of knives and forks were in with items from the east indies specifically from "Indea". The owners used other terms for items from other "east indies" regions. So, these are likely to be either European or from India. It also doesn't mention if they are meant for men or women, however much of their inventory does designate when something is specific to one or the other.


Europeans were not the only ones eating with knives and forks during the 17th century. One historian suggested that the fork was adopted from the middle east during the middle ages, with 16th century case knives and forks in museum collections. Italy also got the spinning wheel, horizontal loom, and wooden washboard for clothes from the middle east and so this is not surprising. Knife and forks from Syria and India plus Germany and Netherlands in a sheath come up for auction, luckily many have marks that can ID them.


In the 17th century we can see average everyday people with tubes attached to their girdles. It is possible that during the 17th century that working class persons were more likely to have the two knives in a tube, while wealthier persons had adopted the fork and knife.

17th century design plate in Rijksmuseum collection in the Netherlands: 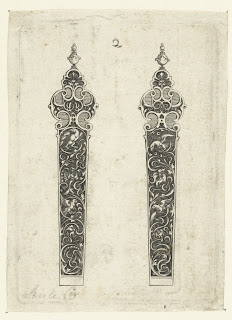