There were a number of different types of fabrics made with sheep's wool. One particular type found in both New Netherland and New York is "Laken", but I have yet to of found it in New England. Laken is a tricky word in some respects because the fabric was so popular that the word "Laken" when used in the Netherlands, become synominous with the word for "cloth" in general. When English dictionaries such as the "A copious English and Netherdutch Dictionary" published in 1675  translates Laken into English, it is the generalized term that is used. However, manufacturers continued to use the term "laken" for only "fulled" made with Merino wool fabrics; otherwise it is predicated with the exact type of fabric as in "serge laken". We are lucky to have extant swatches of woolens from the 17th, 18th & 19th century. 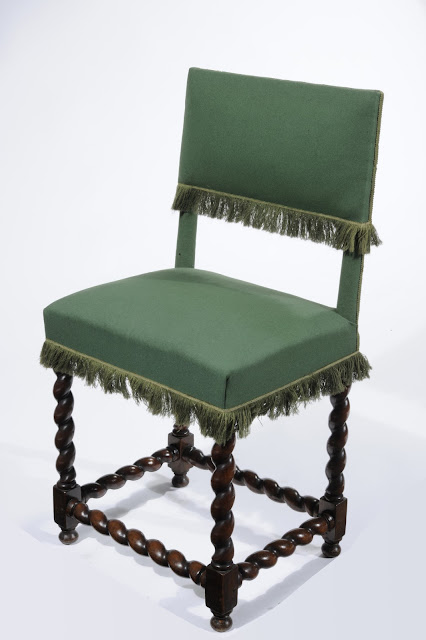 Photo 1: 17th century chair and fabric, fabric is Laken in Green made in the City of Leiden Laken, Museum de Laken


Laken is a woolen,made from Spanish merino wool, woven in the City of Leiden, is thick and "fulled". In a modern experiment to recreate 15th century laken from Leiden by the "Eindhoven" Museum a 2/2-twill was chosen "because fulled 2/2-twills are found in archaeological excavated textiles from e.g. "Groningen" in Holland". ....In a guild guid, different types of laken came in different widths for instance, one type was an 80 twist, which has a 80 port of 30 threads per portee or 2400 threads in the width of the fabric and is 15 quarters of an ell wide with one ell being about 69 centimeters so a finished product was 260 centimeters wide. The study said the fabric was about 9 threads per centimeter. However, the Eindhoven fabric was woven with 10 threads per centimeter in the warp and 8 threads per cm in the weft. The fabric is cleansed with bentonite or "fuller's" earth, then rinsed in a pond. Then a basin is fulled with urine, melted butter and water to create a soapy mixture where the fabric was placed. This mixture does the fulling work over 11 hours and then it is rinsed in the pond again. More can be read in the "Reconstructing 15th century Laken" by Anton Rearing and Katherine Vestergard Pedersen.

The finished product was fuzzy on the inside, had long smooth threads on the outside making it water resistant, is warmer than woolens and more durable than felt. So, it is not surprising to see petticoats being made out of it. In 1638, a court record states that "Cornelis Petersen [male] declared that "Annetje" [female] had sold him a hog and purchased in return of him purple laken sufficient for a petticoat." In another court record from 1667, Madam Cornelia de Vos is seen wearing on her person, "...a green laken petticoat..." Laken is found in inventories from the 1641 "...a "staal" gray lined petticoat..." to when the English received sovereign control of New Netherland (New York, New Jersey, Delaware) in 1667, through to the 1680s and 90s.

The definition of "Cloth" according to the Leiden Laken Museum: "cloth noun (pl. cloths) : 1. [mass noun] a woollen fabric that is first woven and next fulled, which renders it warmer than woven fabric, but stronger than felt. Cloth fabric is used to manufacture clothes, but also for upholstery of furniture and walls."

While we can't be sure if the "1 new purple apron" in a 1641 inventory is laken - though we know there was a supplier of purple laken in the colony - in 1643 there was in a man's inventory, "1 old mantle of colored laken". In a 1651 men's inventory laken is found in several garments, whereas, the word "stuff" is also used to distinguish mixed woolens in the same inventory.

1 suit of colored laken with a narrow braid
1 suit of black laken,
1 remnant of laken
one colored laken dress, half worn
one black woolen stuff for a short cloak 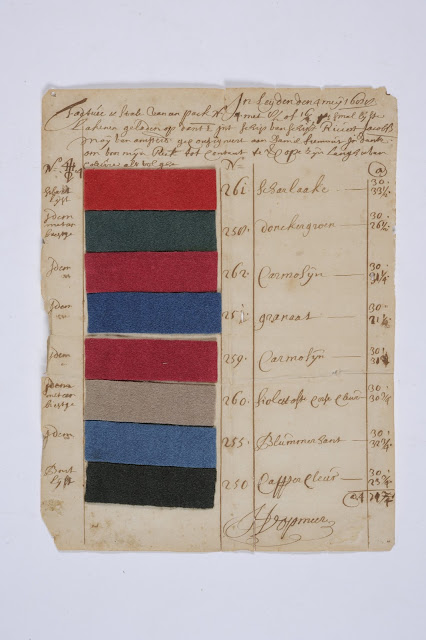 Photo above: a Laken swatch card from 1688 made in City of Leiden, Museum de Laken- Top to bottom: Scarlet, "Dark green", Crimson, "graraas", Crimson (II), beige, "Blummer" (Flower?) Sense, "Caffee" Color. Photo below: a close up of the filled fabrics. 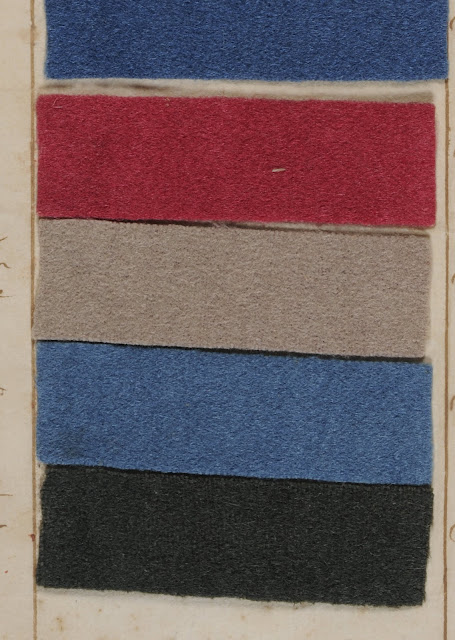 Later inventories show the continued use of laken despite fashion changes. While silk is in inventories since the 1640s, it is no longer used in only Sunday suits or "best dress".  By the 1650s suits, gowns, and petticoats are made of silk. Cotton is also found since the 1640s as is other thinner weight wool fabrics. But by the 1650s wardrobes become more diverse in their fabric selections. Despite this, laken - often written as "cloth" - is found in inventories while the colony is under English sovereign rule. While the question of whether a garment labeled as "red cloth" is laken or not is not perfect; the listing of other garments and their fabric as was the case with "laken" vs. "stuff" helps clarify its use. In later inventories we see the use of cloth, serge, kersey, and stuff, but not "woolen" unless it is used to describe stockings and caps or as a category header for a list of woolens.

A 1678 inventory listed the following: 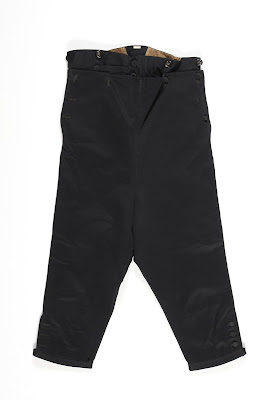 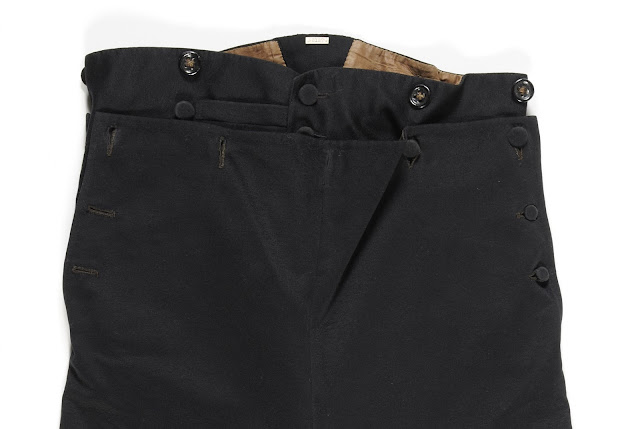 Considering laken's use as a winter fabric, it is not surprising to see it still being used nearing the end of the 17th century in breeches with a winter coat. Laken mentioned as cloth continues to show up in inventories into the 18th century. The Laken industry was hight through the 16th and into the 17th century, declined for a few decades and then picked back up going into the 18th century and continued into the early 19th century.  The reason Laken made a come back is because it was made from fine merino wool, whereas many heavy woolens were made from good but not great wool. This allowed these companies to survive competition from other nations that did not use merino wool.

Thank you for exploring Laken with with me !